This analytical report includes the results of research conducted by StopFake analysts based on archived data of debunked messages from Russian media.

Since its launch four years ago, the StopFake project has debunked over a thousand fake news stories about Ukraine. In the following research, we present the results of a quantitative analysis of fake news debunked by the StopFake team. Using content analysis, StopFake indexed collected fake news materials by source and theme in order to recreate the media ‘ecosystem’ that generates fake stories about Ukraine. This method also distinguished which key narratives Russian propaganda construct, including those supported by fake stories. Thus, the main categories of the collected material analysis were the sources of fake news and those sources’ themes. The unit of analysis was a news story with debunked fake information, published on the StopFake website.

Content analysis of the debunked fake news helped to identify a comprehensive list of media that were sources or distributors of fake stories. It also distinguished tendencies in the circulation of fake stories by different types of media. In the second part of the research, we analyzed the theme structures of fake stories. The themes revealed patterns in the narratives constructed by Russian propaganda concerning Ukraine, for example: the dynamics of promoting certain themes and messages, ways to construct the messages, narrative modifications, and so on.

StopFake identified 178 media outlets as sources of fake stories. Russian media outlets most consistently spread false information about Ukraine (85 out of 178 sources). Among the sources of fake news distribution, we also identified thirty-four Ukrainian media outlets, twenty media outlets from the so-called “Donetsk People’s Republic” and “Luhansk People’s Republic,” and thirty-nine media outlets from other countries. A significant number of the media outlets from other countries were Czech, Hungarian and Slovak news websites. Hence, we can say that Russian propaganda functions in a full-scale distribution “ecosystem” of untruthful information together with other types of propaganda materials (for example, biased “analytics”). The intricacies of such an ecosystem have both an external and an internal dimension. 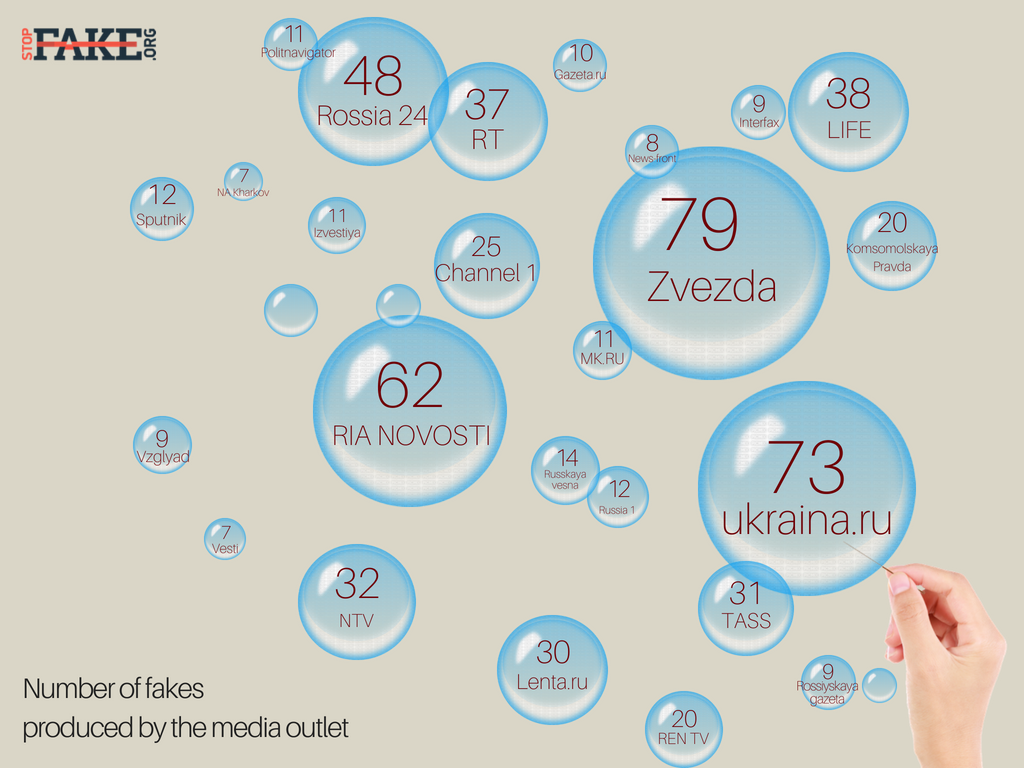 A large number of media organizations of various types, used for the distribution of propaganda content, constitute the internal dimension. For instance, analysis of debunked fake stories about Ukraine identified the following leaders among Russian media outlets: the largest amount of fake news was generated by Zvezda, the media holding of the Ministry of Defence of Russia (seventy-nine stories); in second place was the website Ukraina.ru (seventy-three stories); and in third place was the information agency RIA Novosti (sixty-two stories).

The amount of fake materials distributed by leading Russian media outlets entails a systematic effort behind propaganda distribution. Even though the list of media outlets identified by StopFake includes some Ukrainian media outlets, or those that disguise themselves as Ukrainian, the number of non-Russian media spreading fake news dimmed in comparison to the number of leading Russian media outlets doing so. For example, the largest number of fake stories among the so-called ‘Ukrainian’ media outlets, seven articles to be precise, was found on the website http://nahnews.org (the so-called “Kharkiv News Agency”). As it is known now, Kharkiv News Agency is a part of the St. Petersburg ‘Troll Factory.” This website, as well as many others, is, in fact, directly administered by and edited from Russia and does not have a single correspondent in Kharkiv. It is also worth noting that nahnews.org routinely echoes the key points of Russian propaganda about Ukraine.

Six stories were identified as fake on the Obozrevatel website. The rest of the Ukrainian and foreign media were sources of no more than one to three fake stories among those StopFake debunked.

After analyzing a sample of 500 articles, all examples of the Kremlin’s propaganda, eighteen narrative themes were identified. Yevhen Fedchenko, co-founder of StopFake, was the first to distinguish this classification in his article Kremlin Propaganda: Soviet Active Measures by Other Means (Estonian Journal of Military Studies), Volume 2, 2016, pp. 140–169): 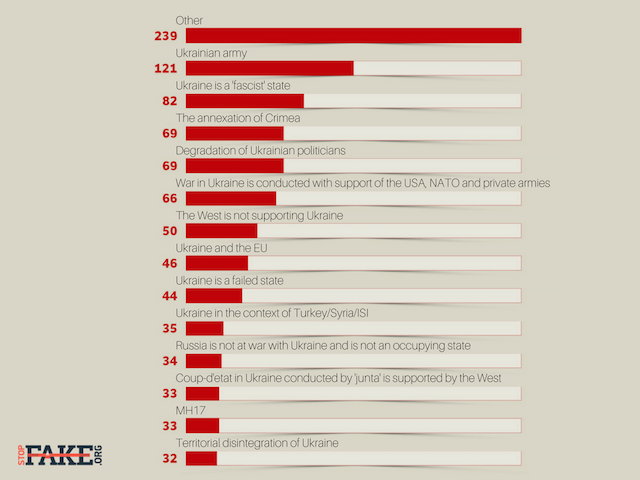 Ukraine as a ‘fascist state’

The war in Ukraine is conducted by the US, NATO or private armies

A decline of Western support for Ukraine

Ukraine and the EU

How bad the situation in Ukraine is

Ukraine in the context of Turkey/Syria/ISIS

Russia does not participate in the occupation/war

The analysis of the primary narratives in fake articles showed, on one hand, their wide variety, and on the other, their persistence in promoting Russian narratives about Ukraine. During these four years, certain focuses were systematically promoted in media that would influence public opinion among different audiences.

In particular, the largest number of debunked articles (121) focused on the Ukrainian army and the volunteer battalions in eastern Ukraine.

Since the first days of the military confrontation in The Donbas, Kremlin-linked media outlets have launched active attacks on the Ukrainian army. These attacks have aimed to portray the Ukrainian army, in contradistinction to the Russian army, as weak and out of control. This example aptly demonstrates how Russian propaganda disseminated destabilizing and aggressive rhetoric about the Ukrainian military meant to influence public opinion. While describing Ukraine, Russian media used terms such as “armed coup d’état,” “Kyiv regime,” “junta,” “deserters,” and placed a clear heroic focus on Russia: “Russia helps its brother nations,” “Russia does not conduct war,” “the Russian army is noble and peacekeeping.” Hence, Russian propaganda not only distorted reality and manipulated it by creating artificial stories and concepts; it also conducted value and ethical inversion, wherein a criminal is depicted as the victim and the victim is blamed for committing the crime.

The outlets also promoted stories about the “atrocities of the Ukrainian Army.” Using the framework of this narrative, Russian propaganda created a number of shocking and completely fake stories describing large-scale atrocities perpetrated by the Ukrainian military. A well-known example is that of a propagandistic video story describing alleged atrocities by the Ukrainian military in the village of Stepanivka in the Shakhtarsk district in the Donetsk region. On November 2, 2014, the Perviy Kanal (Channel 1) broadcast a video about Ukrainian military operations in Stepanivka. In the news briefing, Viktor Bikodorov, the self-proclaimed “Head of the Village Community,” says that the Ukrainian military entered the village and gathered all the inhabitants in one place. Purportedly, the locals asked them, “Why are you fighting on our land?” Their alleged response was: “We were promised a plot of land and two slaves.” This video is an excellent example of the absurd and open manipulation employed by Russian propagandists. The briefing did not contain any evidence or proof substantiating the interactions or the event. The video featured a dynamic sequence of video shots which were, in fact, a synthesis of episodes filmed in the village of Stepanivka in 2014 with documentary newsreel of atrocities from the Second World War. The reporters referred to the Ukrainian army as “punishers” while the video sequence of atrocities conducted by German and fascist occupiers served as the manipulated analogy between these events. The journalists of the Russian First Channel associated Ukrainians with fascists without any evidence, attempting to create a negative attitude toward Ukraine among the TV audience. At the same time, the authors of that story kept silent on the fact that separatists had actually destroyed the village during the shelling.

Numerous untruthful news stories claimed that “the punishers have beaten up soldiers’ mothers,” “destroyed kindergartens,” “killed priests,” and “shot peaceful villagers.” The outlets made these claims without supporting arguments or evidence, and intended them to have a psychological impact on the audience by creating fear and encouraging a negative attitude toward the Ukrainian military in general.

Thus, one story out of nine contained untruthful information about the Ukrainian military, aiming to create a criminalized image of the Ukrainian armed forces and to delegitimize it.

The second most popular narrative was that of Ukraine as a “fascist state” (eighty-two articles).

A significant number of fake stories were about the annexation of Crimea (sixty-nine), the degradation of Ukrainian politics (sixty-nine), as well as “news” stories allegedly proving that the United States and/or NATO organized the war in Ukraine and that private contractors fight on the Ukrainian side (sixty-six).

Russian propaganda combines the theme of the Ukrainian military as enemies and attackers who are both merciless and unprofessional with the narrative of the West as Russia’s key enemy. Western powers are allegedly conducting a global geopolitical war against Russia, with Ukraine simply functioning as a battlefield in the fight. In this context, Russian propaganda gave the Ukrainian army new content components. According to numerous messages published in the Russian media, the West (the United States and NATO) conducts the war in Ukraine. Such messages include: “US contractors are fighting on the Ukrainian side,” “Afro-Americans are fighting in the Ukrainian army,” “A Polish private company, ASBS Othago, is fighting on the Ukrainian side,” and “Drunk Americans caused a fight in Mariupol.”

Another example containing the full spectrum of Russian propaganda discrediting the Ukrainian army was the narrative created around flight MH17 (thirty-three). Numerous media outlets blamed the Ukrainian army, declared that Western countries decided that guilt lay on the Ukrainian side, and invented conclusions made by investigative commissions.

“Ukraine was willing to down a Russian spy airplane, that turned out to be a civilian aircraft, which simply was not aware that Ukraine had been designated as a no-fly zone,” the RIA Novosti article quotes Andrey Purgin of the so-called “Donetsk People’s Republic.”

“The possible target of the Ukrainian missile that hit the Malaysian Airlines Boeing 777 could have been the plane of the President of Russia, a source in the Russian aviation authority says. The President’s plane crossed the path of the Malaysian airliner at one point and in one echelon near Warsaw,” an RT piece says.

However, in the case of flight MH17, the main goal of the Russian media was not to attribute guilt. More facts and evidence proved that the Ukrainian side was not involved in this crime. Instead, the outlets aimed to create an “information noise” effect, whereby the audience stops analyzing the message completely and simply accepts the position broadcast most frequently.

Such narratives as the “decline of Western support for Ukraine” (fifty materials) and “Ukraine-EU relations” (forty-six) also received a lot of attention.

At the end of 2015, the overarching themes regarding Ukraine changed and were given new meaning. The outlets became more overt in their bias when covering the geopolitical scope of Russia and different countries, such as Syria, Turkey, Germany and so on. The coverage of themes connected to Ukrainian, Turkish and Syrian issues transformed in a peculiar way. The Russian media broadcast the following stories: “Turkish Bandera Supporters: Jihadists Fight in Ukraine” (Rossiya 24), “Azov Battalion is Ready to Fight against Russia in Syria along Turkey” (RT), “Ukrainians Are Fighting on the Syrian Terrorist Side” (nhnews.com.ua) (thirty-five stories). In this case, Russian media created a synthetic image of the enemy, one which encompassed all of the primary threats to Russia.

In general, analysis of the narratives of fake news stories demonstrates continual attempts by Russian propaganda to construct an image of Ukraine as a failed state by delegitimizing its armed forces, government, and policies in different areas. Another key element in the outlets’ portrayal of Ukraine is depicting Ukrainian society as dominated by ultraright opinions and groups.